So I have this hot friend Emme, and she swears by the njoy Pure Wand for amazing, low-effort g-spot orgasms. Prior to meeting her, I'd never heard of njoy OR their Pure Wand. So when I looked it up online, I was very surprised to see this: 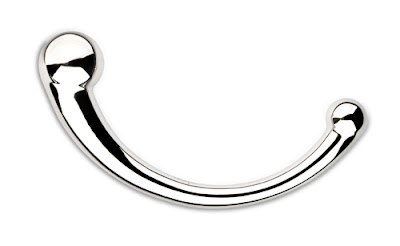 Then I saw the price. $107.99 BEFORE shipping?! Yikes! Could it really be that good? My friend swore emphatically: Yes. Yes it could.

My darling husband-who-spoils-me-rotten didn't even bat an eye when I mentioned it to him. Whaddayaknow, 3 days later I got a nice little heavy package in the mail (tip: shop around, you can find them quite a bit cheaper than the original price I found).

Now my friend Emme likes this toy for many, many reasons, but ranking right up there is her ability to use this ergonomically-designed dildo on herself to produce gushing orgasms. In fact, she says it's the only toy she owns that makes her ejaculate. I can squirt, and reliably, but never with a toy that I am wielding by myself. Now hubby can play me like a Stradivarius, but on those lonely nights when he is working, I've been relegated to inferior orgasms (sorry Hitachi Magic Wand, I wouldn't trade you for anything, but sometimes a girl just needs more).

Opening the gorgeous wood box I had to take a moment to just look. Nestled in a custom-molded cradle lined with fuschia satin was an unassuming but beautiful instrument: 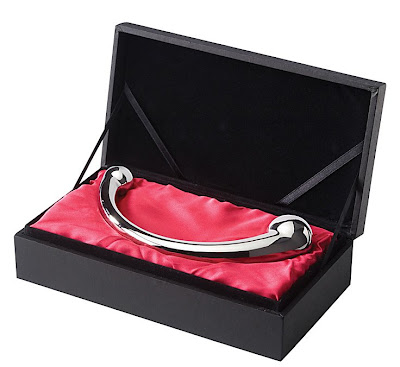 Pretty, yes, but it didn't really look all that kinky. I sort of wondered if it could really do all she said it could; the curve was just modest and it was smooth as a baby's butt. No texture, no batteries. Still, its 10" length and those knobs on either end seemed like they could promise a good time.

I gently lifted my new friend from its box, and was immediately surprised at the heft. It's supposed to weigh in at 24 oz. (which, if my high school math hasn't failed me, is a pound and a half). Kinky urban legend has this baby weighing in as high as three pounds (!), and I can see where people might think it weighs more. This just isn't the sort of weight that most of us are used to associating with a sex toy.

That night, hubby used it on me for the first time. Here's where I must digress a little:

I don't know how many of you ladies are able to ejaculate, but if you haven't ever had a squirting orgasm, try this: pay attention after your next orgasm, especially if it's after some steady internal stimulation. Do you develop a sort of "heaviness" or faint aching in your lower abdomen in this situation? I do, and it wasn't something I ever gave a second thought to, until my new husband was able to make me squirt. Fortunately for me he is quite a bit better endowed than my former partner (although not freakishly huge), and infinitely more patient and skilled. My first ejaculation took us both by surprise because we weren't really trying for that. I had despaired of ever finding my g-spot, even wondering if it might be a myth, and had certainly never DREAMED I could squirt! This newfound ability opened up a whole new world of sexual satisfaction for both of us. Oftentimes now, I can feel that achy buildup of fluid, and I will beg him to make me squirt. Once I release that way, I feel completely, utterly satisfied.

But back to the njoy... female ejaculation could be a whole other blog post! My point is, if you have ever felt that achy heaviness after sex, even after an orgasm... even after a g-spot orgasm (not all g-spot orgasms are accompanied by ejaculation), then maybe the Pure Wand is the tool that can help take you to that next level. When hubby used it on me that night, oh my. Something in the cosmos aligned.

First off - the thing was COLD. Some of you may not think that sounds appealing, and that's okay! A fabulous aspect of the Pure Wand is its versatility. If you don't like it cold, then run it under warm water before you use it. Or wrap it in a heating pad. If you like it REALLY cold, throw it in the fridge!

I don't think I'd recommend the freezer with this particular toy, though: 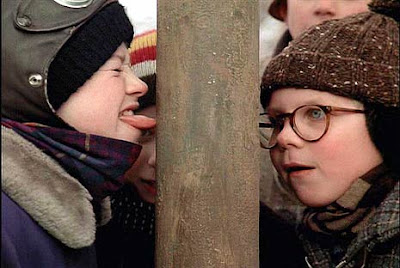 Not even on a Triple-Dog Dare.

Come to think of it, I'd probably avoid the microwave as well.

From my own experience, if used at room temp (which feels cold), your body heat will warm it up pretty quick. For me the initial temperature contrast is a real turn-on.

Hubby started nice and slow with the smaller end, which is 1" in diameter. From MY end of things, I wasn't really sure which side he was using... it just felt niiiiiiice. It went right to my g-spot like a heat-seeking missile, and his slow strokes had me close in no time. He could tell I was on the edge... and withdrew. TEASE!

Besides precisely "milking" my g-spot (like a prostate), the feel of that big, heavy ball pushing from the inside and straining against my vaginal opening with each almost outstroke was unbelievable. I gushed within about 5 strokes.

SOLD!!! And worth every damn penny.

Just to make sure this amazing experience wasn't due mostly to operator expertise, I tried it on myself a few nights later when Hubby had to work... I had my first self-inflicted female ejaculation. Yep - it's a great tool. Many thanks to my hot friend Emme for the advice!

I've thought a lot about my Pure Wand since our first encounter, specifically how to justify its price tag to those who might not yet be convinced. I've come up with a little list:

2. It's pretty... you could even display it on your mantle! Or put a lampshade on it and tell your friends its a Major Award.

3. It's a real multi-tasker. A convertible pervertible. Alternate (non-sexual) uses I have come up with include: back massager, meat tenderizer, paperweight, plumb-bob, hammer, and bedside impromptu weapon (like brass knuckles or a shillelagh) for the unlikely event of a break-in. With a little imagination I am sure you can come up with many more uses for this little gem!

4. It's no-maintenance: easy to clean and so durable it will probably outlive me.

5. It's an heirloom piece. You can pass it to your kids or grandkids and they will remember you, very fondly, forever.

Email ThisBlogThis!Share to TwitterShare to FacebookShare to Pinterest
Labels: V and g's Toybox

You've gone, Sir... off into the frigid dark, to fulfill your duty as a productive member of society. Selfish me - I only want you next to me, sharing the warmth of each others' bodies, skin on skin, inhale on exhale. Your musk lingers on your pillow... our scent lingers on the sheets. I burrow in as deep as possible and try to forget the miles of frozen highway before you, the hours if semisleep before me... try to remember that time really does fly, and June is only a Season away. I Love You my Darling. Come Home soon.
Posted by V and G at 21:43 No comments:

Email ThisBlogThis!Share to TwitterShare to FacebookShare to Pinterest
Labels: By "G", Journal
Dear Heart
since you smiled at me
I know longer have to wonder
what it feels like
to touch the clouds

How I need your touch
Lover, I fairly tremble
Please return to me

Email ThisBlogThis!Share to TwitterShare to FacebookShare to Pinterest
Labels: By "G", By "V", Poetry

In the temple of sweat
Two shadows on the near wall
Are plunging and grasping
Connected in fragile chaos
Close as pages in a book
Posted by V and G at 21:41 No comments:

Email ThisBlogThis!Share to TwitterShare to FacebookShare to Pinterest
Labels: By "V", Poetry

"I think Captain Jack Sparrow has a crush on you..."

The baritone of your voice vibrates through your chest and into my ear, causing me to close my eyes and inhale contentedly. Never breaking the rhythm of our slow sway to the local band's passable rendition of Patsy Cline's "Crazy," I reluctantly lift my head from where it has been resting happily against your chest. You incline your head slightly and my gaze follows past Beetlejuice, a pair of adorable sailor girls, and an assortment of witches, vampires, and zombies to where a drunken and dishevled approximation of the famous big-screen buccaneer leans precariously over the second-story railing that surrounds the dance floor, eyes wide and mouth slightly agape. Shameless, the way he is gawking, but then the same descriptor could aptly describe the pirates-eye view afforded by the neckline of my Naughty Policewoman costume.

Your low chuckle brings my attention back to you, and in contrast to the falseness of my eyelashes and long black wig, the blush that creeps from my cheeks to my decolettage is very real. Your big hands slide from my narrow waist down to the fabric that stretches tightly over my generous backside. "Let him stare, Baby..." you murmur in my ear as you pull me tighter into you, "It's probably the biggest thrill he's going to get tonight..."

My hands move up to rest behind your neck and we turn in a slow circle, swaying easily through the last strains of the song. I tell you I'm ready to get out of this place and back to the hotel suite you have booked for us. You raise no argument as you take my hand, escorting me out into the chilly October air. Low wolf-whistles arising from the smokers gathered outside the bar follow us to the car. I'm driving: you've had one too many beers tonight.

Perhaps its the beer, possibly the residual energy from the crowd of pumped-up Halloween revelers... hell, maybe just the sheer chemistry we have but we are barely a mile down the road and my right breast is out of confinement and in your big hand. I peel my eyes from the road for a moment to admire the contrast of my moonlit pale skin against the shadow of your chocolate brown fingers. It's damn difficult to drive while my nipple is being teased, pinched, suckled, nibbled. Damn difficult. But we make it, and when I put the car in park and begin to tuck my tits back into my clothes, you start giving me my orders.

"When we get inside, you are going to drop to your knees. I am going to stand in front of you and you are going to pull my big black cock out of my pants and start sucking it. You will keep sucking it as I fuck your face. You will gag and drool but you will not stop until I tell you."

"When I do tell you that you may stop, you will stand up and walk over to the table. You will bend over. I am going to come up behind you and rip off your clothes, then fuck the shit out of you while you are wearing your black 'fuck-me' boots and red 'fuck-me' corset. Do you know why? Because you've behaved like such a little slut and little sluts need their pussies to be punished."

"Yes, Sir..." I whisper, eyes closed and shuddering at the visuals in my mind.

Louder, on a shuddering exhale, "You're going to fuck me in my ASS, Sir!"

"Now get out of the car and go inside."

I am breathless and my head is spinning as we cross the parking lot and as I mount the stairs in front of you, your hand plays under my dress and between my inner thighs, which are already slick with anticipation.

I am fairly trembling as the key card slides into the lock and the door clicks.
Posted by V and G at 18:25 No comments:

At The Sushi Bar